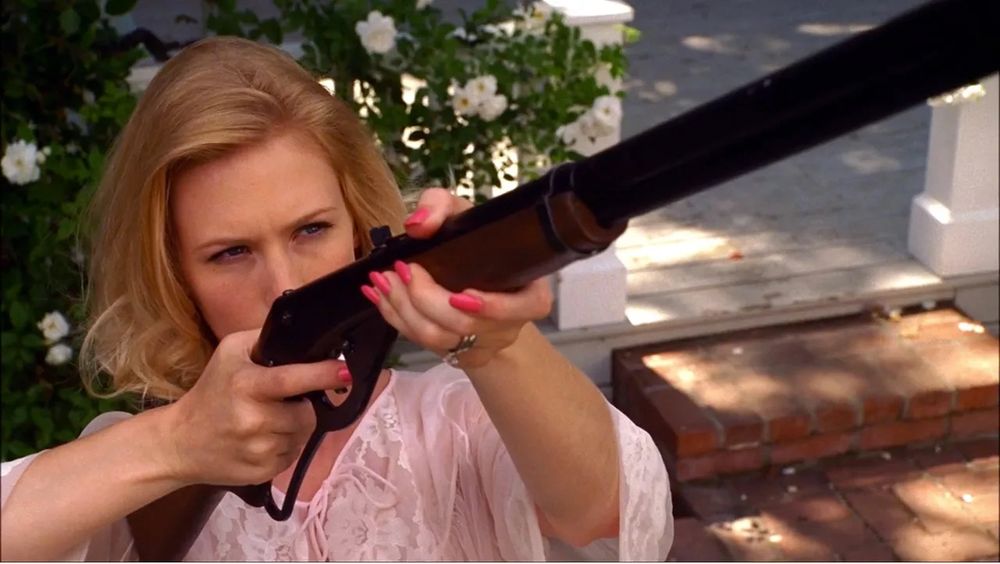 Each Monday we watch an episode of Mad Men (available on Amazon Prime) and put together notes on what we can learn from it about running agencies. Read an introduction to this blog series explaining more, and then follow our notes below for Episode 9 …

The focus of this episode is all on Don's wife, Betty Draper, who he calls by the pet-name of 'Birdie' — but, as seems to be the way with Mad Men, the characters personal lives are all a rich metaphor for what's going on at the agency.

The Drapers' neighbour keeps homing pigeons. Each day they fly free, and each day they return to the coop. Then, one day, the Draper's dog tries to catch a bird, with great and dramatic effort. He catches one, but it is freed from him and goes back to the coop alive. The neighbour threatens to shoot the dog.

This all happens while 'Birdie' is out at a shoot, a photo shoot, seeking to fly free from her monotonous suburban housewife life to return to a modelling career. At the shoot multiple people say she resembles Grace Kelly. They mean physical resemblance, but it's notable that Kelly is the famous actress who gave up her career for marriage to a handsome prince and children, and never starred in a film again. The audition is to be the face of a Coca-Cola campaign, and is offered to her by the Jim Hobart, head of the massive McCann ad agency.

Sadly, Betty doesn't know that this offer is just one more carrot being dangled in front of Don by Jim Hobart to try to tempt him away from Sterling Cooper. McCann have sent him membership of the exclusive New York Athletic Club, and a set of golf clubs. They offer vast sums of money, and the temptation of working with the biggest clients with the biggest budgets. But, from the start, Don seems uninterested.

Roger picks up the scent that they're after Don, and tries to talk Don out of it. He tells him he wouldn't enjoy a big place like McCann — "Always having to keep the stock-holders happy. You'd never be able to fire a client. You'd hate that!"

Roger says, "It's not just about money. Look around you. The team, everything. You'd be starting again."
Don: "I haven't made up my mind yet."
Roger: "I'm taking this very personally"
Don: "Why? It's just business?"
Roger: "Is it?"

There's buzz all around the office that McCann are going to poach Don, and the assumption that he couldn't turn them down as it'd be so much money. It unsettles people and they wonder who he'll take with him.

This switches Don off completely — "That was not a big league move," he tells Jim. He marches into Roger's office and negotiates a pay rise to stay, way lower than he could get at McCann. His only condition is that he won't have a contract.

Roger: "No security? What's in it for me?"
Don: "I guarantee you. If I ever leave this place, one day, it will not be for more advertising. It'll be for life being lived. I want to stop talking about it and go do it."

Of course, we know one reason Don doesn't want lawyers and paperwork involved is he's using a stolen identity, and is really Dick Whitman. Perhaps he also knows a big firm like McCann would have thorough vetting processes for big hires. Or perhaps he genuinely does want to be the bigger fish in the smaller pond — the one calling the shots.

There's lots in this episode that foreshadows the grand finale of the whole series in seven seasons' time, showing that our ends are always seeded in our beginnings.

Betty is offered copies of the photos from the shoot for her portfolio, but she tells Don "I don't want to be running around Manhattan touting for work like a teenager." She stands in anger, with a cigarette hanging out of her mouth, taking pot shots at the pigeons with her son's BB gun as we fade to black.